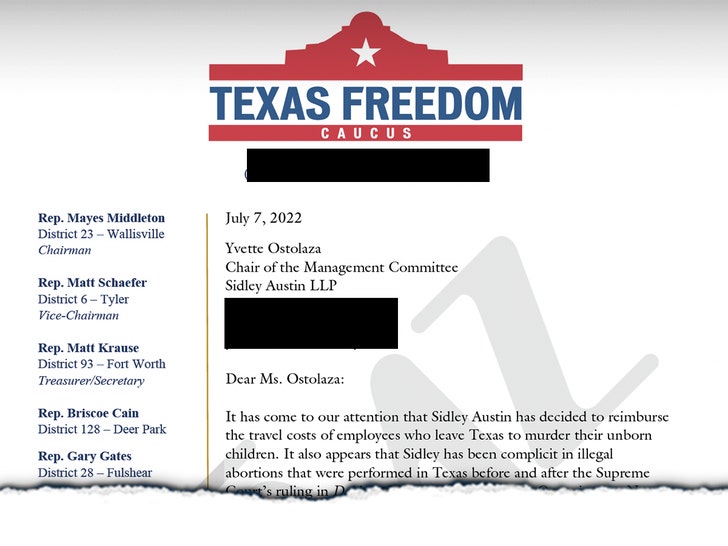 Eleven members of the Texas State Legislature have fired off a letter to Sidley Austin, one of the largest law firms in the U.S., threatening the firm and its lawyers with criminal prosecution and disbarment if they in any way facilitate abortions, even in other states.

The letter, sent to the Chair of the firm’s management committee and obtained by TMZ, states the Texas Freedom Caucus — run by the 11 Texas Republican representatives — has become aware Sidley Austin is “reimbursing travel costs of employees who leave Texas to murder their unborn children.” The Caucus also accuses the firm of complicity in performing illegal abortions.

Rep. Mayes Middleton, the Chair of the Caucus who signed the letter, warns Sidley Austin abortion is a felony in Texas unless the mother’s life is in danger.  Middleton notes the law covers “drug-induced abortions if any part of the drug regimen is ingested in Texas, even if the drugs were dispensed by an out-of-state abortionist.”

Middleton threatens, if Sidley Austin violates the law, the firm and all of the partners will be subject to criminal prosecution and disbarment.

And maybe the most ominous … the letter says Sidley “may have aided or abetted drug-induced abortions in violation of the Texas Heartbeat Act, by paying for abortions (or abortion-related travel) in which the patient ingested the second drug in Texas after receiving the drugs from an out-of-state provider.” The letter goes on to say there is litigation underway to uncover the identity of the lawyers who did this. The letter demands Sidley preserve all documents related to any lawyer who basically helped any woman get an abortion after Sept. 1, 2021 — the date the Texas Heartbeat Act was enacted.

The letter goes on to warn the law firm and its 2,000 lawyers … there will be new legislation in the next session of the Texas State Legislature that will specifically target law firms that pay for abortion or abortion-related travel.

The legislation would also give private citizens the right to sue anyone who pays for an elective abortion performed on a Texas resident … whether they pay directly or reimburse. It will also incentivize citizens who bring these lawsuits with a $10,000 bounty if they prevail.

And in case there are any D.A.’s who won’t enforce the law … the proposed legislation would give any D.A. in the State the right to prosecute even outside their jurisdiction.